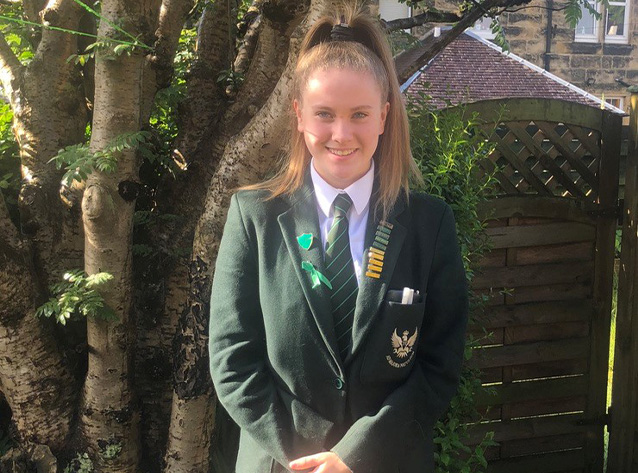 The Boston ‘shared values’ exchange is a partnership between St Aloysius’ College and Boston College High School along with Notre Dame Academy (Massachusetts). This partnership allows Boston students to travel to Glasgow and be hosted by Aloysian families while becoming immersed in school life here on Hill Street.

In June 2019, both partner schools in Boston sent a group of students to St Aloysius’ College. This proved to be an incredible experience. Stephanie Weir (S3) recalls her experience from the exchange:

The Boston exchange was an incredible experience as it allowed me to make many new friends and helped me learn a lot more about myself. The exchange started before our Boston brothers and sisters arrived, as we were messaging and Skyping each other in the weeks running up to their visit so that we could get to know them, their families, their pets, and their likes and dislikes etc. This was really worthwhile as we knew who was staying with us in our homes and we could call them our ‘friends’ before their plane even landed in Glasgow!

When the morning of their arrival came, albeit with a daunting 6 o’clock wake up call, I was nervous but very, very excited to finally meet the girls I had been in contact with for weeks. When the girls and boys from Boston arrived, we were all so enthusiastic and previous thoughts about nervousness quickly disappeared. The first morning was quite relaxed and after our greetings at the airport everyone went their separate ways. I was hosting two girls for the first half of the week, so as we all returned to my house we all settled in for the morning, then we were all treated to my mum’s traditional Scottish breakfast to get us ready for the day ahead.

All of the girls from both Boston and St. Aloysius' had agreed to meet up and go shopping to help everyone meet each other and spend time together. This was a very fun afternoon as we had a chance to show the similarities and differences between our two countries and what each had to offer; it was as if we were shopping through their eyes. Apparently our “malls” are very small, despite us thinking Braehead was rather big! We all enjoyed each other’s company; laughing together and bonding as a group.

That night, we were all lucky enough to get tickets (from very supportive Aloysian parents), to attend Scotland vs Cyprus football (or as they called it “soccer”) match. We are very thankful to the many parents who have allowed us to have opportunities such as this one. The football skills themselves were something to be desired, but since it was the first football game experience for some, we really felt like we were becoming friends as we were teaching our Boston brothers and sisters some of our less traditional but nevertheless very important cultures. Especially when Scotland won, the atmosphere was amazing. Some of the girls commented saying:

“It was very loud, but that made it more exciting, and the chants were cool!”

That Sunday morning, we all got ready for the party that was taking place in the afternoon. We all came together again when one family invited all of the exchange students as well as Aloysian hosts to their home. This was a great way to meet some of the boys as we hadn’t all come together as one big group yet. We had a very fun time, playing around on the trampoline, as most of us from Glasgow all slowly realised how un-athletic we were since we were watching our Boston brothers and sisters doing backflips and all kinds of gymnastics. We all dug into some pizzas and had a really good time which was a great way for everyone from all three schools to get to know one another in a more casual setting.

By Sunday evening, we were all looking forward to our school week ahead. When we got to school on Monday morning, everyone went into the Magis exchange room, which would be our main group room for the week. We were then split into our three groups and took the pupils and teachers from Boston on a tour of the school. After that, every St. Aloysius' pupil escorted a Boston student to their next class to experience some of our lessons.  Later, we said farewell for a brief time to our Boston brothers and sisters as they went on a bus tour of Glasgow.

A real highlight came later for me, when we had arranged to go to Escape Rooms Glasgow as a fun activity for the night. We all had such a great time and were put into random groups and effectively locked in a pretty scary room for an hour. This allowed everyone to step outside their comfort zones and it was a really good bonding experience. That night was the first time everyone had all come together, and it really made us feel more like one community, rather than different schools.

The Tuesday was originally the day I was dreading, but it ended up being one of the best. We were going to Loch Ard for a day of canoeing, this may sound fun for most people but I have a huge fear of water. Yet my fears abated as my friends helped reassure me.

When everyone eventually got out on the water and we started to get the hang of it, I became less scared and began to enjoy the experience a lot more. We all had mini races in our small groups and my partner and I even managed to win a backward race. After lunch, we each had an option to go out canoeing again or to jump in and swim in the loch. I naturally went for the option least likely to give me hypothermia and got back into the canoe. We visited an island, played some team-building games, and then raced back to shore, and then we all splashed each other and had a good laugh.

That night was the last night most of us had with our Boston friends as Wednesday was the switchover day. I took my Boston sisters along with some of my closest friends out to dinner at Loch Lomond; as if we’d not seen enough water for one day! It was a really great night as the two girls got to interact with others outside school.

On Wednesday we had a Scots language lesson with Mr. Young, which taught everyone something including us from Glasgow. It was also quite funny having the Americans try to read in a Scottish accent. After that we all took someone to classes with us until lunch. I really enjoyed doing this as it gave them a chance to see what school was like for us, and also to meet other people in our classes.

The students from Boston then went on a trip to Kelvingrove Art Gallery, where they spent the remainder of the day. That night everyone went into town to go shopping and have dinner. Most of us went to see a movie then most of the Boston people went back to settle into their new homes for the remainder of the week. It was strange going back into my house and sleeping in my own bed, not hearing American accents around the house, even though they had only been there a few days.

Thursday was a particularly fun, and interactive day entitled “Finding God in Artistic Expression”, which we spent in a pottery studio. We were instructed to sit with people you had not sat with previously in the week, and this was a really good way to make us talk to one another out of our comfort zones. Everyone really enjoyed the day, and we were all happy with how it went. That afternoon there was a shared reflection on the experience thus far, and this was an interesting way to see what other people thought of the exchange and to give your own opinions. Some of my classmates commented:

“I have thoroughly enjoyed the Boston exchange. I made lots of great friends and loved hosting two girls.”
“It has been a really educational and fun week.”
“It was a great way to learn about the American way of life and to show them ours.”

And some of the Boston pupils also shared their thoughts:

“It was really fun and glad I got to meet so many new people whom I hope to stay in contact with for a long time.”
“An unforgettable experience in which I have made new friends and learnt more about an interesting culture in Scotland.”

The last day of school was quite sad as the pupils from our school said goodbye to the friends they had met before they departed on a trip to Edinburgh for the day. Meanwhile, the rest of us were back to normal classes at school.
That night, however, was one I had been looking forward to a lot since we were going to Braehead and the Skypark. We all got to go shopping for about an hour before, which was another fun and interesting shopping trip, but we still made it back to the Skypark and Drop. After that thrilling event, we all went to dinner and had a really good time with everyone, spending our last night together. It was quite emotional when everyone left that night, as some people weren’t going to the airport the next morning, so we said our goodbyes and tried to get to bed reasonably early if we were getting up very early the next morning.

That morning was always going to be an emotional one, saying goodbye to friends we had bonded with so well. We all hugged one another and took some last-minute photos before they left for a very long flight and we all went back to bed.

When I was talking with my friends about the experience, there was a general feeling of a community and thankful for the opportunity we were given. It was truly something we all felt happy for and could share together:

“It was a great experience I will never forget and would love to do it again.”
“I would definitely recommend others to get involved next year.”

And one of the girls from Boston had some very nice words to say:
“Summing up how much fun I had in Scotland is quite impossible, but I’ll try. Being part of the Boston/Glasgow exchange was an incredible, eye-opening experience. I met many amazing people whom I hope to cross paths with often in my life. Glasgow is such a lively, charming city with so much character, with really funny and cool accents, and I would love to return someday in the future. Overall, it was an unforgettable trip which lead to great friendships I never thought I could have.”

This exchange has been a tremendous experience, I overcame fears and made lifelong friends, for example, some of us are going to visit them in Boston either during this or next summer. This shows that we have made lifelong friends and shared some memories that will stay with us for the rest of our lives. I would like to thank the teachers at St. Aloysius’ College, BC High and Notre Dame Academy for making this exchange possible, and to all the pupils who took part in not only hosting or participating but also those who helped them feel welcome at our school and in our classes.

As one student aptly states, “it is memories such as these that will last a lifetime.”