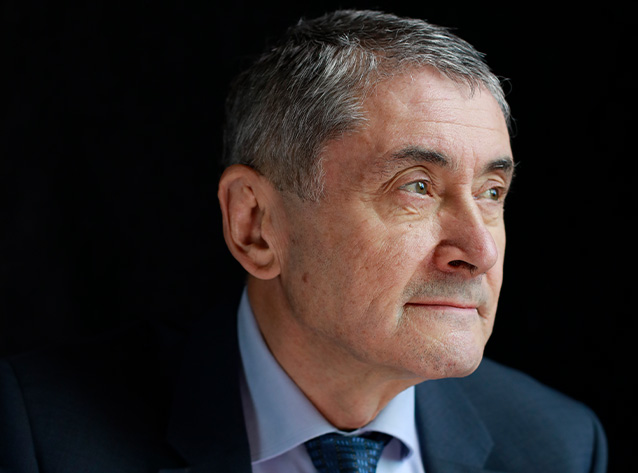 This morning, we had the pleasure of welcoming Sir Harry Burns, class of 1969 (and former parent and governor) back to the College to be recognised as part of our 2019 OA Hall of Fame, for his services to the improvement of health and wellbeing in Scotland.

Sir Harry, and his wife Lady Senga, attended this morning’s ‘Celebrating Success’ assembly where Harry delivered a fantastic talk to our Senior School pupils, sharing an insight into what brought him to St Aloysius’ College. Sir Harry told our pupils of how his father first heard of the College when he was at school in Fife, and was inspired by a chance meeting with a boy who claimed that he’d gone to ‘the best school in Scotland: St Aloysius’ College!

Harry also explained to our pupils how significant it is to help other people in life, especially those who may be less fortunate than we are, and how important it is to be ‘men and women for others’.

Sir Harry Burns graduated in medicine in 1974 from Glasgow University and in 1984, he was appointed Consultant Surgeon, University Department of Surgery, Royal Infirmary, Glasgow.  In 1990, following completion of an MSc Public Health, he was appointed Medical Director of the Royal Infirmary.  Many of his patients lived in the east end of Glasgow and it was this insight to the complex inter-relationships between social and economic status, illness and recovery that began his lifelong focus: to reduce health inequalities.

In 1994, he was appointed Director of Public Health for Greater Glasgow Health Board and in 2005 he became Chief Medical Officer for Scotland.  He was Knighted in 2011 and in 2014, the First Minister, Nicola Sturgeon, presented him with a lifetime achievement award for public service from the Scottish Government.

In April 2014 he became Professor of Global Public Health at Strathclyde University.  In addition to research publication and supervision of doctoral students, Sir Harry leads on a number of major, multi-agency projects and is Chair of the University’s Centre for Health Policy.  He is a regular invited keynote speaker to local, national and international events and to academic programmes.  Among many appointments, he is a member of the Scottish Government’s Council of Economic Advisors; a member of Diabetes UK Board; Chair of the Wheatley Foundation; a member of Johnson & Johnson’s Impact Investment Advisory Committee and a member of the Health Foundation’s Sciana Programme for international health leaders.

In November 2017, the Scottish Government published Sir Harry’s report on an independent review of targets and indicators in Scotland's NHS.