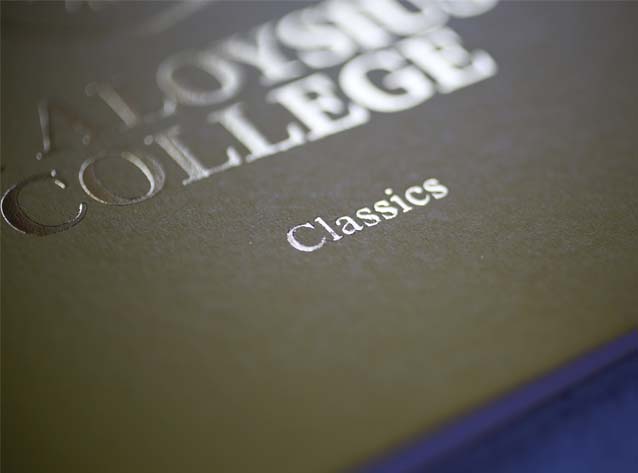 “Latin is a language, as dead as dead can be; first it killed the Romans, and now it’s killing me.”

NOT at St Aloysius’ College, where we have a thriving, dynamic department which attracts a large number of pupils each year to study Latin and Classical Studies.

Using a wide variety of resources, they explore the intricacies of Classical languages while gaining an insight into the lives of the ancient Greeks and Romans.

All pupils in S1 study Latin. Here, using the Cambridge Latin Course with its interactive website, they explore the lives of the Romans in Pompeii immediately before the eruption of Mount Vesuvius in 79AD. In S2, there is then the opportunity to develop their knowledge about language through myths and the stories of ancient heroes such as Achilles and Odysseus. These studies open the door to the possibility of progressing to Latin and / or Classical Studies from National 5 through to Advanced Higher. By studying these ancient societies and gaining a deeper insight into how they organised themselves, pupils are more able to develop an appreciation of their own culture and heritage. They also develop a wide range of key analytical and evaluative skills. Pupils regularly perform exceptionally well in the SQA courses on offer, and it is not unknown for all pupils at all levels to attain A grade in national examinations.

The Department organises regular excursions. As well as highly successful trips to Rome and Pompeii, we have also taken groups to Hadrian’s wall, and to the Pompeii and Troy exhibitions at The British Museum in London.

We are lucky in our central location which allows us to attend exhibitions and theatre productions in Glasgow and other nearby cities.